Is China the new US? China is now the number one importer globally of beef!

Is China the new US? China is now the number one importer globally of beef – a mantle that the US once coveted. By Simon Quilty. (March 1, 2019)

The rise and rise of demand from China has made many of us wonder if China is the new US in terms of being the global dominant player for beef imports – once upon a time it was believed that the US market set global beef prices but strong evidence is starting to say that China is now dictating global beef prices and the US is losing its mantle as the number one driver of global beef demand and supply.

Key points in this paper are:

China imported in 2018 a record volume of beef surpassing any other year prior and in August became the largest global importer of beef surpassing the US for this prized mantle – this has seen China’s beef imports for both November and December at record levels of greater than 104,000 mt of beef for each month.

The factors driving these large import volumes into China

When assessing the record volume of China imports its important to remember that China has been unofficially the largest importer of beef globally for many years when you take into account the grey trade between Vietnam, Hong Kong and China. In recent times we saw in 2015 the largest volume of imported beef by the US of 1.12 M tonnes (shipped weight) which was matched by Greater mainland China 2 years prior – realistically China has unofficially held the mantle for 6 years with the grey trade up until 2018 dominating the bulk of these beef imports – in 2018 the Chinese government clamped down on this trade which has seen for the first time in many years direct imports being now the largest majority of this trade at 52%.

The forecast for greater beef imports into China is on track for 2019 as the switch to beef grows and it would be fair to say at the expense of Chinese domestic pork.

Some key points to note

China’s influence I believe is most pronounced at the lean end of the market where cow and bull boneless beef is now being value added and sent as IW cuts into China which might have once gone to the US as grinding meat for hamburgers. 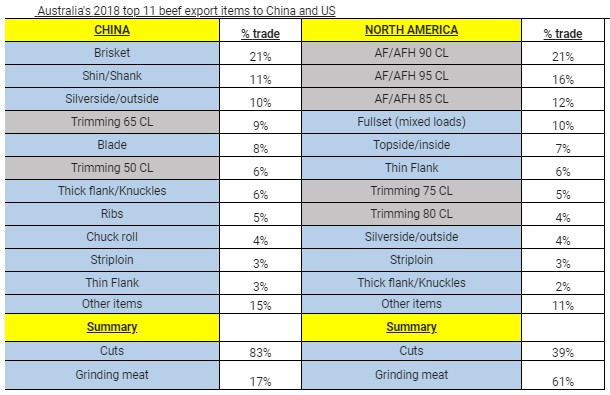 The answer to this question I believe is yes when it comes to cow and bull items from both Australia and New Zealand – when assessing NZ beef prices over the last 3 years it shows there is a genuine seasonal price trend developing whereby September is the low in China’s demand cycle and the peak occurring during Chinese New Year in January/February (depending on when it falls that year) – there is normally a gradual decline in beef prices that in recent years has been on average 40 ncz/kg until April before a pickup in May, June and July. Does China lead the US on market on price?

US pricing almost seems counter-cyclical to China with the low in pricing in February which is followed by an improvement leading up to the northern hemisphere summer – it does not apply to all items but it does explain why there has been a significant volume of NZ meat exported to China in preference to the US.

The China price dip in April is most likely due to the large New Zealand cow run traditionally peaking in early May and the decision by most NZ exporters to forward sell in April to manage the cow meat volume – in the past this has been seen by US importers as a strategically a key time to buy large volumes of NZ frozen imported cow meat to put away for the northern summer demand period – the question is Does this strategy still work given half of NZ US beef exports now go to China?

I believe this strategy will be truly tested in coming months and is likely to see imported 90 CL meat in the US trade at parity with US domestic 90’s as opposed to the usual discount that would have occurred in the past – this is simply because of the lack of volume of both imported 90’s and 95’s – what was once a significant strategic advantage for importers owning cheap lean meat  will possibly be no longer the boon it once was.

The impact of China’s demand is very different for both Australia and New Zealand and plays a crucial role for several South American countries.

New Zealand’s beef production is heavily weighted towards lean meat due to New Zealand’s high bull and cow production which combined make up 61% of the country’s total kill due to the strong influence of the dairy industry – so China is a natural fit for New Zealand both in terms of China’s desire for lean meat but also because of the timing of production with the New Zealand bull run dove tailing nicely into the Chinese New Year demand period.

Australia’s role in China I see as different and is regarded by some processors as still an immature market – namely because of the uncertainty of the Chinese market and the unpredictable nature of the country requirements – in short, there is too much politics that impacts Australian beef exports which creates a degree of uncertainty about ongoing access to the China market. This was best seen back in July 2017 when six meat works were banned from shipping to China due to supposed labeling issues that lasted for 5 months – and in recent times the on going lack of approval for 16 meat establishments in Australia that have been on the waiting list for 2 years even though China continues to keep approving other countries and plants all over the world.

I believe the Australian meat and livestock industry is being dogged by federal politics as Australia’s China relations remain strained – as long as this continues it creates doubt in this trade and prevents Australia from reaching its full potential into this market – conversely other countries are increasing their export footprint in China unfortunately at Australia’s expense.

Any feedback is always appreciated.

This email may contain confidential information. If you are not the intended recipient, please immediately notify us at by replying to the sender, and then destroy all copies of this email.

No advice: Unless specifically stated, nothing contained in this communication constitutes investment, legal, tax, financial or other advice and it should not be relied on in making an investment or trading decision (e.g. to acquire, hold or dispose of a financial product). Any advice provided has been provided for general information purposes only and may be based on incomplete or inaccurate information and did not take account of your objectives, financial situation or needs.

I make no recommendations as to the merits of any financial product or service referred to in this newsletter and/or attachments or on its websites.

This email (and any attachment) is for the exclusive use of the addressee and may contain information that is privileged, confidential or protected by copyrights. If you are not the addressee or the person responsible for delivering this email to the addressee, you must not disclose, distribute, print or copy this email and the contents must be kept strictly confidential.

The way of more flesh Global meat-eating is on the rise, bringing surprising benefits – By The Economist

Special Report: Four global analysts from China, Brazil, US and Australia discuss trends of 2018 and beyond

Back to all news
Up to Date